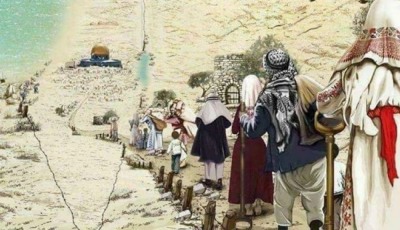 !! The nakba and what do you know what happened to the Palestinian!!

It examines the human tragedy related to the displacement of a large number of the Palestinian people outside their homes. It is the name given to the Palestinians for their displacement and the demolition of most of their political, economic and civilizational landmarks in 1948. It is the year in which the Palestinian people were driven from their homes and lands and lost their homeland in favor of the establishment of the Jewish state - Israel. Incidents of the Nakba include the occupation of most of Palestine by the Zionist movement, the expulsion of more than 750,000 Palestinians and their conversion into refugees, as well as dozens of massacres, atrocities and looting against Palestinians, the demolition of more than 500 villages and the destruction of the main Palestinian cities and their conversion into Jewish cities. He expelled most of the Bedouin tribes that lived in the Negev and tried to destroy the Palestinian identity and erase the Arab geographical names and replace them with Hebrew names and destroy the nature of the original Arab countries by trying to create a European landscape.

Although politicians chose 15/15/1948 to date the beginning of the Palestinian Nakba, the human tragedy started before that when terrorist Zionist gangs attacked Palestinian villages, towns and cities with the aim of annihilating them or terrifying the inhabitants of the surrounding areas in order to facilitate the displacement of their inhabitants later.